Region with high potential to become a Major Outsourcing Centre 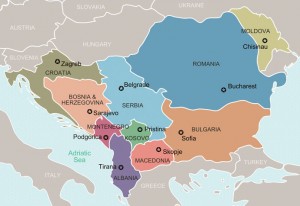 It’s music to the ears of those trying to staunch brain drain in the Balkans. Analysts at the Gartner company, a leading firm that assesses the global information technology market, are forecasting that this year, more than 23% of the world’s investments will be spent on IT outsourcing, or approximately 697 billion euros.

Outsourcing is contracting with another company or person to do a particular function when the first company doesn’t have needed knowledge, skills or resources or can have the same things for a cheaper price.

Southeast European countries are collectively stepping forward in a big way to grab a bigger slice of the pie, according to new reports published by the Sourcelink site.

“This region can become the new India for companies that want to move part of their work in their own time zone and cultural space,” Marko Kovacevic, a board member of the Trizma, a pioneer of outsourcing in Serbia, told SETimes. Trizma specialises in BPO (business process outsourcing) and the outsourcing of call centers. It is a strategic partner of the US corporation NCR, providing services to European clients in nine languages.

The potential for much more exists. “On this map, Serbia is still in the fringe because we use only 5% of our capacities, especially the IT knowledge and investments in this business,” said Kovacevic.

According to ITOnews.eu, the hourly rate for a Serbian IT specialist was about 19 euros, and up to 32 euros per hour for project managers.

In Albania, the outsourcing market is estimated to be worth 4.1m euros, while the average rate for outsourcing work was 14 euros an hour.

In Croatia, IT outsourcing market volume is worth an estimated 44.6m euros, with an average hourly rate of 19 euros.

In Bulgaria, the IT outsourcing volume is estimated at 256.5m euros, paying 17.5 euros an hour; in Romania, the heaviest hitter, it is 469m euros at 21 euros per hour.

“The foreign IT companies benefit from outsourcing companies, because it is cheaper to pay the consultant in Serbia, than workers in their own country. It is also good for us programmers, because we get the job in the company where wages are much higher than average,” said Miroslav Zivotic, 30, a programmer in a Belgrade IT software company that solely serves foreign IT companies.

Before this job, Zivotic worked as a programmer in a domestic company and earned less than half what he makes now.

The outsourcing industry has long favored Asian countries due to the low service costs. Although India, China, the Philippines, Malaysia, and Singapore still dominate the industry, Eastern European countries are now asserting their presence in the outsourcing market.

According to the Sourcelink report site, Bulgaria was the first European country to be included in the top outsourcing countries for 2010. This year, it ranks 6th in the world, behind India, Indonesia, Estonia, Singapore, and China.

Bulgaria was once known as the “Soviet Silicon Valley”, its software sector subsidized by the government throughout the communist period. For decades, it was a key supplier of software and hardware to the Soviet Union and Eastern Europe, and managed to build on its 40 years of experience in hardware, software, and electronic development during its challenging transition to capitalism. Today it is one of the key suppliers of IT and software development in Eastern Europe.

A joint analysis by Colliers International and AT Kearney in 2009 and 2010 concluded that Bulgaria held the top position for outsourcing possibilities among the 12 European countries surveyed, based on three categories: financial attractiveness, people and skills availability and business environment. The other countries were: Czech Republic, Estonia, Hungary, Latvia, Lithuania, Poland, Romania, Russia, Serbia, Slovakia and Ukraine.

A main quality of the Balkans is the multilingualism of its citizens. “The price of work in the Balkans is almost three times less than in England or Germany, but it is four times higher than India offers. For that reason, certain bidders try to lower the price, while the state is trying to provide some benefits to [attract] investors,” Natasha Starkel told SETimes. She is the director of the company and internet portal GoalEurope, which specializes in research and consulting in the area of “near shore” outsourcing. That is the employment of the labor force in the neighborhood.

In Romania, the IT outsourcing industry is growing ahead of the rest of the economy. The IT sector is awash with acquisitions, local companies being snapped up by foreign investors. As one of the first socialist countries to develop computers and software programmes, Romania is now home to more than 2,000 software development firms, according to the outsourcing companies site Outsourcing.ro.