Home » I'm Outsourcing » Dinu Mester: ‘I think Oradea is the first in the top of BPO attractive emerging cities in Romania’

Dinu Mester: ‘I think Oradea is the first in the top of BPO attractive emerging cities in Romania’ 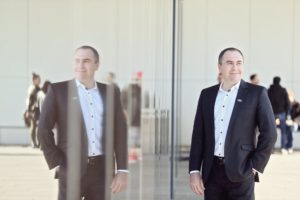 Today we’re making a virtual stop in Oradea to talk to Dinu Mester, who has kindly agreed to share his professional journey with us as part of our campaign – I am an Outsourcing Professional. Dinu helped us discover the particularities of Outsourcing in Oradea, which he considers the no.1 BPO attractive Romanian emerging city of the moment – find out why.

OA: Please state the most important stops in your career so far.

D M: Fortunately, there are just a couple, but each was a very beautiful, exciting and enriching experience.

My first and the most valuable, complex and extended stop was building a 900-people organisation for Parisot Groupe French (PGS) upholstery sofas producer in Oradea. My experience there can be split in two stages.

When I started in January 2005, Parisot Group had a subsidiary in Oradea – a small workshop with 40 workers and a foreman – and I was the Commercial and Administrative Responsible. I’ve spent my first three years with the company learning about all the processes typical for a small business from planning to delivery, from recruiting to contract termination, from accounting, finances and controlling to supply chain, engineering, production, human resources and customer care. This enabled me to build a performing organisation with end to end services and processes (excluding Marketing and Sales delivered from Paris, France) between 2010- 2016. Amongst my achievements as a COO and deputy General Manager I would mention: forming and bonding a strong team and building a performing 900-employees manufacturing organisation.

This has set the scene for my next career stop – becoming the Team Leader and Operations Manager deputy for the SSC of Office Depot (OD) in Cluj-Napoca, between 2008-2009. In this role I had again the chance to build a brand-new team. I was responsible for creating the account payables team and transitioning the Operations from France to Cluj and it was also my first experience as a People Manager. The most valuable processes and tools that I have integrated in my knowledge portfolio are process mapping, management by objectives and performance management.

OA: You have had the experience of growing an Operations team from 50 to 900 employees in the space of 4 years – how difficult was it to achieve this milestone?

D M: There was a lot of sweat and tears, but also a lot of accomplishments and satisfaction!

I remember the most stretching situation was the autumn of 2010 when we had to shift from our 2007 production level to its double. All the team members had to overcome their mental and professional limits and it wasn’t easy. But once we’ve done it we continued to add 10M euros every year, growing from 10M euros production and sales to 60M euros in 2016. What enabled us to get to this result was sitting together more often in the same room, working closer together and giving everyone the possibility to express their difficulties. That was my first moment of real life applied leadership!

Another important moment was the creation of a team mission statement letter written by me in French and presented officially to my team in the spring of 2011. It had a powerful effect of professional authority and served to clarify, communicate and bring my middle management teams together around common operational objectives. We continued by defining our team core values and key performance indicators which each manager would cascade to the teams. This turned out to be a successful initiative with our people saying that “Our company name PGS does not stand for Parisot Green Sofa but for Performance Guarantees Success!”

‘I think any organisation, be it a Shared Service Centre or a producer for export, has to respect its people. That’s core!’

OA: What should an Outsourcing organisation do in order to attract and retain talent?

D M: I think any organisation, be it a Shared Service Centre or a producer for export, has to respect its people. That’s core!

Secondly, in order to build a strong brand, organisations have to show no toleration for bad behaviours, attitudes or language. You know the saying: “money attract money”? It is the same with talent!

If we talk about retaining talent we have to have in mind Maslow’s hierarchy of human needs. In the 21st century people need more than a secure workplace, and organisations have to embed belonging, self-esteem and self-actualization opportunities in their corporate strategies.

One other essential aspect here is wage. While it is no longer a motivating factor, it can be a big demotivating factor if it is not at the right level. The last five years have shown big and rapid changes in terms of salary levels in the big cities in Romania. Short term, companies that are not prepared to recognize and accept this dynamics suffer from an employer brand and attractiveness perspective, seeing then their performance being impacted middle term and their overall competitiveness decrease long term.

OA: What are the biggest challenges that a SSC/ BPO are facing from a workforce perspective?

D M: I think the workforce planning is the biggest challenge because of the wage level dynamics, the pool of talent polarisation and the companies’ competition to attract the best talents.

OA: How did the Outsourcing industry in Oradea change in the past years, from your point of view?

D M: Oradea is a middle-sized city counting up to 300.000 inhabitants (considering the metropolitan areas as well), 15.000 students enrolled in state and private universities and very low presence of BPOs and SSCs. Alongside Sibiu and Craiova, Oradea is one or Romania’s emerging cities. It is attractive for BPOs because of its location at the western border, the accessibility by highroads and air lines, the multi-language skills available and the relatively low level of the average wage for universities graduates.

We can see a lot of changes in the market – the salary income taxes have led to a 50% increase of the revenue of our city in the past 5 years, the competition on the labour market for hand working manufacturers (sofa producers, EMS and Automotive assemblers) is massively increasing as well. Actually, today it is more difficult to recruit 10 unqualified workers for an assembly line in factories that to recruit 10 entry-level young graduates in economics, law, communication, foreign languages and other social sciences. And what is more surprising is the fact that the wage level remained the same – around 1800 RON net / 3000 RON total wage cost for a company. That’s why I consider Oradea the first in the emerging BPO attractive cities in Romania.

OA: Can we talk about a typical profile of an Outsourcing Professional in Romania?

D M: Yes. Outsourcing has initially started with call centres and continued with low value added standardised, repetitive, volume processes. Today, we can say that a job in Outsourcing is typically the first (one to two years) job for young graduates, speaking foreign languages, a job where they can get accustomed with the professional life and acquire practical skills, such as: communication styles, professional behaviours and attitudes, team work and being customer focused.

There’s another aspect that we need to point out here – the employees turnover rate of 25% per year which, based on my experience, is a certitude. For example, I’ve kept contact with my former colleagues from Office Depot SSC Cluj and in a time span of 4 years since I left the company, my former team was formed of all new people. Out of my former employees, some got promoted internally, but the majority left for more complex jobs that offered more personal and professional development opportunities.

What this means for me is that our workforce is becoming more mature and it’s ready to take on more specialised roles. The new development strategies for both existing and new Romanian BPOs and SSCs have to integrate the next level of maturity in order to attract and transition more value-added processes and design long career paths that support employees’ desire to grow and become senior specialists.

OA: What role does a management / leadership team play in creating a healthy business culture?

D M: An exclusive role! In my vision, a Leader influences the creation of a business culture but, more importantly, he is the one who should support and guarantee it through his role. What makes the biggest difference between companies is not their accounting reports and statutory statements, nor is it their written procedures and rules, but their culture which is the set of unwritten values and beliefs one can grasp once getting on board.

D M: I am sure we are intentional human beings who build their lives and consequently their careers.

I have to emphasise that the intention is only the first ingredient. Then a good strategy and a lot of work are needed to get where you want to. You need to persevere in the right direction. How can you know what the right direction is? Just start somewhere, start where you are now and listen to your heart…you will feel it!